Emma was born in 2004 and lives in Israel. She is a student at Thelma Yellin High School of the Arts, in Givatayim. She has been playing the violin since 2011. For the first four years, she studied with Alexander Goldbaum at the Beer Sheva Conservatory. Currently, she is a student of Dr. Guy Figer at the Israeli Conservatory of Music (ICM) in Tel Aviv. Since 2011 Emma has been playing in string orchestras and in different ensembles of chamber music. 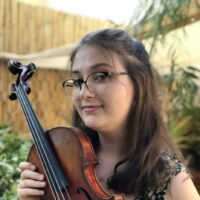