She performed a solo concert for harp and electronics as part of the 63rd Biennale Musica di Venezia (Teatro alle Tese), where the harp was presented as a soloist for the first time in the history of the Venice Biennale. At the concert Emanuela Battigelli played works commissioned for the occasion by the Biennale and dedicated to her.
The most recent accomplishments include: the participation as a soloist with the Orchestra di Padova e del Veneto (concert seasons of both the Orchestra Filarmonica di Torino and the Orchestra di Padova e del Veneto) with the Danses for harp and string orchestra by Claude Debussy under the direction of Luigi Piovano; a solo recital for Mittelfest with the program Celebrating Life (inspired by the celebration of life in different times and cultures - in which she performed the première of Improvisaciòn dedicated to her by composer Luis de Pablo); the Italian première of Ivan Fedele's Gstaad Variationen for the Accademia Filarmonica Romana.

Among her numerous performances she has been a leading figure in audio and video broadcasts for RAI, BBC, ARD, RTV Slovenija, RSI, Israeli radio and television and Arte.

She had the privilege to collaborate as a member of some of the world’s most prestigious orchestras such as Berliner Philharmoniker, London Philharmonia and Orchestra del Teatro alla Scala, under the baton of conductors such as Daniel Barenboim, Simon Rattle and Kirill Petrenko.

Emanuela Battigelli is known for her interest in the field of contemporary music and the ability to create original concert programs, highlighting the harp and the music of today in a modern, profound and comprehensible way, also thanks to the collaboration with important composers who have dedicated to her works for solo harp.
In her discography – which includes solo harp albums published by Artesuono and Limen Music – and in her concert programs, appear first recordings and premières of works for harp by composers such as Luis De Pablo, Ivan Fedele, Reynaldo Hahn, Toshio Hosokawa, Malika Kishino, Somei Satoh, Leon Schidlowsky and Germaine Tailleferre. 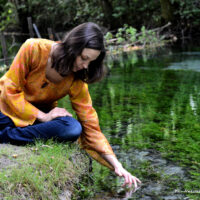