Elinor Sitrish is an Israeli-American singer-songwriter born in the city of Dimona, Israel.

At a very young age, she had an affinity for music. She began singing, writing, and performing as early as 9 years of age and routinely kept doing so throughout her school years. Shortly after graduation she began working with other professionals in the music industry and performed around Israel and Europe. Elinor's musical influences are incredibly diverse ranging from classic to modern Rock, Pop, Blues, Soul, and Jazz. Her ability to infuse this vast range of musical styles along with her deep middle-eastern roots helped create a truly unique concoction of her own. Once she completed her mandatory two-year service in the Israeli Defense Forces she made a decision to move to the United States to pursue her music career.

Focused on her music, she based herself in Los Angeles and began working and collaborating with local producers and artists. She worked closely with the multi-award-winning Sound Supervisor and Composer, Roy Braverman. Together they released a number of songs such as Broken, Black Heart, Trying Not To Fall, and One reason. Elinor also released I Will Believe and Goodbye Is Not A Word written by the well-regarded singer-songwriter Michael Caruso. While working on her solo projects she met with the award-winning composer, producer, and peace activist, Yuval Ron. Yuval was so impressed with Elinor's unique voice and her natural connection to the middle eastern sounds he invited her to join his world-famous ensemble, The Yuval Ron Ensemble, as a lead singer.

Elinor's performances in both, small and big venues in the US and around the world continue drawing old and new fans. Her undeniable charisma, radiant stage presence, and rich and colorful voice all flow together through the genuine simplicity of her songs leaving the crowd feeling emotional and rewarding.

Currently, Elinor continues working on her solo projects, collaborating with other artists, recording, and performing. Whatever the background and whatever the language, people from all walks of life and all nationalities find something close and intimate in Elinor's musical performance, in the studio, and on stage. 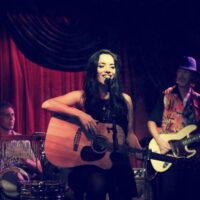