Elinor worked as an assistant conductor for John Adams, Barbara Hannigan, Nikolaj Szeps-Znaider, Xian Zhang and Marin Alsop. She had masterclasses with Gianandrea Noseda, Matthias Pintscher, Louis Langrée and David Zinman, and was invited to participate at the Tanglewood Music Festival in 2018.

As a clarinetist, she has a Bachelor’s degree from the Cleveland Institute of Music, being mentored by Franklin Cohen, former principal clarinetist of the Cleveland Orchestra. She won the CIM (Cleveland Institute of Music) Concerto Competition on her freshman year and was invited to study at the Conservatoire National Supérieur de Musique et de Danse de Paris with Philipe Berrod, principal clarinetist of Orchestre de Paris. She continued her conducting training at the Buchman-Mehta Music Academy in Tel-Aviv, Israel. 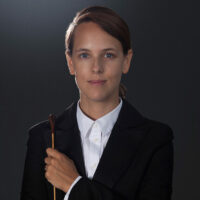