Elad Bogomolny was born in Israel in 1995 and started his violin studies at the age of 7. He studied with Lena Mazor and from 2006 to 2013 with Igor Frug at the Israeli Conservatory of Music in Tel Aviv. In 2013-2014 he studied with Prof. Hagai Shaham at the Buchmann-Mehta School of Music, and from 2014-2016 studied privately with Vladimir Mazel. Since October 2016, Elad has been enrolled in the Barenboim-Said Akademie in Berlin, with Prof. Axel Wilczok.

From 2013-2016 Elad served in the IDF with an “outstanding musician” status, as an arranger of music for chamber ensembles.

Elad is a 5-time recipient of AICF scholarships for violin in 2007-2015. In November 2010, Elad won the second prize in a national competition for young composers organized by the Israeli Educational TV Channel and the AICF, for his composition for solo violin which he also performed. In April 2013, Elad received the second prize in the Eran Zoldan national competition for violin and cello.

Since 2006, Elad has participated in master classes with Sergio Schwarz, Ofer Erez, Vadim Gluzman, Itzhak Rashkovski, Hagai Shaham, Miriam Fried, Rainer Zipperling and Itzhak Perlman. In 2012 and 2013 he attended the Keshet Eilon summer master courses, and in April 2014 and May 2015 participated in the Perlman Music Program (PMP) in Tel Aviv.

Since 2009, Elad has been a member of the David Goldman program for outstanding young musicians. He has performed in public concerts both with chamber ensembles and as a soloist in recitals and with orchestra, in Israel and abroad.
In 2014, Elad helped establish a music school in a local township, with the mission of making music education accessible for young children there. He is a driving force behind the school gamification approach to musical theory studies and considers improving musical education as one of his main professional goals. 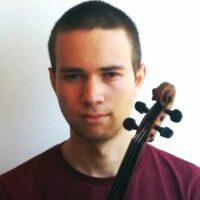