Eitan Kenner is a NYC based keyboardist, producer, composer, and video maker.

Born in Tel-Aviv, Israel in 1991, Eitan began studying classical piano at the age of six. Inspired by his father, a well-known musician in Israel, Eitan began expanding upon his musical knowledge and gradually chose to focus on Jazz. At 16, after two years in Thelma Yellin High School of the Arts, he joined Rimon School of Jazz and Contemporary Music on a scholarship and was the youngest ever to reach the finals of Rimon’s “Jazz Player of the Year”. Two years later Eitan graduated with honors and by the age of 18, he’s studied and performed with top Israeli musicians all over Israel and in Düsseldorf, Germany. Eitan then moved to the US to attend Berklee College of Music on a scholarship. At Berklee Eitan expanded his interests to playing many different styles, as well as composing, writing and producing music. He has recently graduated with honors and then relocated to NYC. Eitan has studied with Hal Crook, Ralph Peterson, Benny Green, JoAnne Brackeen, Alain Mallet, Dave Santoro, Ed Tomassi and others.

Since moving to the US, Eitan has performed all around the US and China, and has played and/or recorded with Greg Osby, Cory Henry, Sharay Reed, Jamey Haddad, Henry Cole, JoAnne Brackeen, Yemen Blues, Omer Avital, and more. Eitan leads his own project/band named Kenner, which combines musical elements of different genres, and features musicians from around the world who create unique original music and video. Kenner’s music videos have gained positive attention and praise from the NY Transit Museum , and music companies such as Alesis, Alto Professional, Master Strap and ROLI. Kenner’s music videos have won two awards, the 2012 People’s Choice Award for the composition “Tracksounds”, and Global Music Award for the composition “How to Make Hummus in 6 Steps”.” 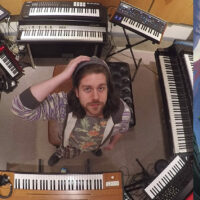