Born in Israel, Eado began his training in his hometown Kiryat Tiv’on before attending the Thelma Yellin High School of the Arts in Tel Aviv.

Eado completed his training at the Boston Ballet School where he was selected by Director Margaret Tracey to join the school’s Trainee programme in 2010, studying under the Pao Scholarship for two years. As a Trainee he performed in numerous Boston Ballet productions, including Balanchine’s Midsummer Night’s Dream, Nureyev’s Don Quixote, Nissinen’s The Nutcracker, Cranko’s Romeo & Juliet and Clerc’s La Bayadère, as well as in the School Showcase in Bourneville’s Konservatoriet.

Eado joined Scottish Ballet in 2014 and has performed in Pastor’s Romeo & Juliet, Pickett’s The Crucible, MacMillan’s Elite Syncopations,
and Darrell’s The Nutcracker.

For two consecutive years, he was awarded the America-Israel Cultural Foundation Award for Excellence in Dance.

“AICF’s support significantly contributed to my development as a dancer, both in Israel and abroad. Their belief in my abilities helped strengthen my skills and my vision. I am happy to represent Israel using art as an important bridge connecting peoples from different cultures and countries.” 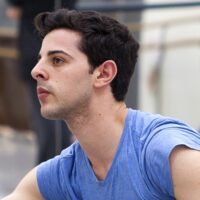