Dov Lederberg grew up in the Philadelphia area and began his involvement in the arts at Haverford College and the Columbia University School of Fine Arts. During the Sixties he became one of the active filmmakers within the New American Underground and The N.Y. Filmmakers’ Co-op. Between 1967 and 1994 he was an independent film director, mainly for Israel TV, making documentary and educational films, as well as creating various video art works.

Since 1995 Dov has been deeply involved in using new art mediums and techniques to express and render the subtle ideas of Jewish mystical teachings and meditation. He has created many original acrylic paintings and video art compositions inspired by the Hebrew letters in the scribal style. 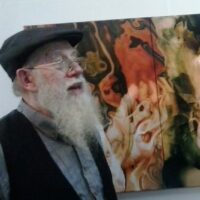