Dor Zlekha-Levy (born 1990) lives and works in Tel Aviv-Jaffa. In 2014, he graduated with dean’s honors from the media department in Hamidrasha Beit-Berl Faculty of the Arts. Dor uses sound as a core element for installations, videos and live performances. He creates continuous collaborations with musicians that crosses the usual use of music as an additional effect that is applied to artwork as part of the post process. His works don’t only play original sounds to the world but also aim to present new ways to experience sound.

Dor’s work has been exhibited in exhibitions in private and public spaces in Israel since 2010, like The Ticho house museum, Pasaz Gallery, Binyamin Gallery, The spaceship gallery, Gebo Gallery, Gross Gallery and others. His films were projected In international festivals and screenings, among them, are Ars Electronica (2013, Linz), Moyen Orient Express (2015, Paris) and Kadist foundation (2016, San Francisco). In the past year, Dor had conducted two major events – “bad seeds of summer” (June 2015, Hamidrasha gallery, Tel Aviv) and “Songs of the Next War” (May 2016, Soundart Pasaz, Tel Aviv). These events included live audio-visual performances and art installations, all developed in collaboration with several musicians as part of a unique working process.

Dor was the resident artist at Artport Tel Aviv (2019-2020), he is a recipient of the 2017 Israeli Ministry of Culture Prize for a Young Artist. He is the winner of ‘Zoom 2016’ prize for young Israeli artist. in 2014, Dor received the AICF Hurvitz scholarship for graduate students in the arts, and Hamidrasha Ruth Schloss’ award for excellent socio-political artwork. His Projects were granted by the European cultural foundation, The Rabinovich Foundation and Tel aviv municipality grant for special projects in arts. His works are held in the collection of The Israel Museum in Jerusalem and in private collections. 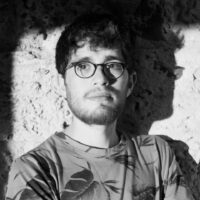