Dikla Stern, born in Tel Aviv in 1972, immigrated to Germany as a young child. From 1999 to 2002 she studied graphic & art at the “Avni-Institute of Fine Art & Design in Tel-Aviv”, with established Israeli Artists and graphic designers. In 2003 she returned to Germany and study Communication Design with a special focus on the theory of media and philosophy at the “University of Mannheim for Engineering & Design”, in Mannheim, Germany. In 2007, she graduated with a Master’s degree (MA) under Prof. Dr Thomas Friedrich.

For some time now, the subject of exploring the outside world has been a constant for her, and this can be seen—sometimes discreetly, sometimes more directly. Her works describe societal phenomena that she perceives as “disturbed.” They show contemporary themes, issues and events, and they reflect the influence of media, politics and history on the individual. She aims to present critical conditions through exaggeration, projecting her overstated perception onto people or objects via the image and the title. This may be subtle or direct. At some point, she began defining her work as political satirical Pop Art.

Since 2011, she has lived and worked in Berlin as an artist, designer and lecturer. Her paintings are in the possession of collectors, private persons, companies and galleries in Germany, Israel, Luxembourg, Switzerland, France and the U.S.

She had exhibitions at museums, biennales, galleries, fairs, public spaces nationally and internationally, in Leipzig, Berlin, Stockholm, Brussels, Florence, New York, Korea and others. Her works can be seen in movie productions, like “Fucking Berlin” and magazines. Her exhibitions were promoted by the “Adrienne and Otmar Hornbach-Foundation”, the “Dieter Kissel-Foundation, associations and other private companies. 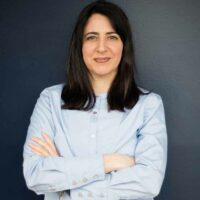