Denis Garejevs was born in Riga, Latvia on the 16th of October, 1998. When he was 7 years old, he began to play the mandolin, by the influence of his parents. He began his studies in the musical group program of 'Netivot Yoram' school by Lev Khaimovich, and there his musical abilities were identified. A few years later, Denis continued his musical studies in the educational institusion "Rubin Municipal Conservatory of Be'er Sheva". When he turned 16, he was thought by Teddy Shushankov, and after one year, Yaki Reuven took Denis under his guidance.

Denis played in many concerts and festivals around the world, and attended and won many competitions in Israel.

Denis took part in the master class of the world known mandolin player Jacob Reuven, and his quartet: "The Kerman Quartet", and in 2016, participated in masterclass with the violinist Vera Vaidman.

In 2014, Denis won the “Arik Kerman Mandolin foundation”. Thanks to the foundation, it helped him to develop musically and mentally.

Today he takes part in the mandolin ensemble of Be'er Sheva, and leads the mandolin orchestra of the Israeli Negev. 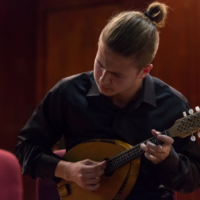