Inspired by her rich South American and Middle-Eastern background, her life voyages and nomadic history, artist Deborah Wasserman makes personal, visceral, Feminist and socially engaged art centered on her experience of being a woman, a migrant, a mother, and a worker in today’s divided, Patriarchal society.

As a multi-cultural and multi lingual hybrid, Deborah’s art often reflects the yearning to belong and the urge to embrace multiplicity (of materials, processes, ideas and even a variety of assumed personas), a diversity that defy hierarchy and represents the Many. Whether in painting or drawing, performance or video, installation or writing, Her art germinates from “in-betweeness” of space, the assimilation of dualities of high and low, public and private, beauty and repulsive, pathetic and glorified.
Deborah’s art is also inspired by the intense and yet gratifying demands of motherhood and ‘making a Home’ as well as by her newly found community in Jackson Heights, the most culturally diverse neighborhood in Queens, NY, where she lives. Finding Home and Community have shaped the artist's vision forever, in assuming greater social responsibility, in wanting to shed light over marginalized subjects, in bringing aspects of care for women and girls, for the environment, and for people at large, into her art practice.

Deborah is a graduate of the California Institute of the Arts and the Whitney Museum Independent Study Program. She has received grants from the Experimental Television Center, Skowhegan School of Painting and Sculpture, Aljira Center for the Arts and the America-Israel cultural foundation. Her work has been exhibited in the USA, Brazil, the Netherlands, Germany and Israel, in such venues as The Bronx Museum of the Arts, The Tel Aviv Museum of the Arts, The Museum Of New Art, The World Wide Video Festival, White Columns, Pierogi 2000, Socrates Park and A.I.R gallery. In 2016 Deborah was awarded an IAP Social Practice fellowship from NYFA and a Su- Casa grant from Queens Council On the Arts.

Wasserman is a grant recipient of the Experimental Television Center, Aljira Center for the Arts, the A.I.M. Program at the Bronx Museum and the America-Israel cultural foundation. She received an IAP Social Practice fellowship from NYFA in 2017, a grant from the Puffin Foundation in 2018, a grant from the Citizens committee for New York in 2019, and a Queens Council On The Arts New Work grant in 2020. Wasserman has been awarded a Su- Casa award from the New York State Department Of Cultural Affairs every year since 2015. In addition, Wasserman is a Finalist for the NYSCA/NYFA Artist Fellowship 2020 in the category of Printmaking/Drawing/Book Arts.

1997 SKOWHEGAN SCHOOL OF PAINTING AND SCULPTURE

1997 SKOWHEGAN SCHOOL OF PAINTING AND SCULPTURE 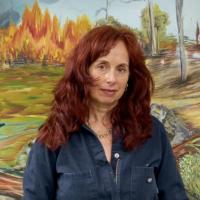