David Sirkis was born in Israel in 1997.
He started playing the drum set at 12, with Shahar Haziza. He continued with Doron Tirosh and Mark Moshayev, and Gilad Ronen. He graduated from Thelma Yellin high school for the arts.

David won a full scholarship for the BERKLEE SUMMER JAZZ WORKSHOP, intended for 15 excellent musicians from all over the world, to work for five weeks with Terry Lynn Carrington and Rick DiMuzzio. They had performances in Boston and recorded a professional CD as well. Being in Boston, he auditioned for Berklee College of Music and won a $20,000 scholarship. However, David joined the IDF instead.

During his studies in Thelma Yellin, David traveled with Thelma Yellin jazz band for a tour of 3 performances in Germany. Following the tour in Germany, they were invited to play at the JEN international conference for jazz ensembles that was held in January 2015 in San Diego.

David was also chosen to be the drummer of Thelma Yellin big band, with which he had several performances at the annual arts festival in January 2015. In addition to this, he participated in various ensembles with Amos Hoffman, Matan Klein, Ronen Shmueli, Erez Barnoy, Rony Ivrin, and Yonatan Volchuk.

In August 2015 he took part in the Red Sea Jazz Festival in Eilat within the young artists' program. 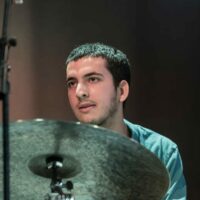