Known for his eclectic and fascinating programs, conductor and pianist David Greilsammer is recognised as one of the most audacious and adventurous artists in the classical world. Praised as a musician who is never afraid of taking risks on stage, he has created some of today’s most eclectic and daring musical projects, winning distinctions from The New York Times, The Sunday Times, The French Music Awards, and many others.

In addition to presenting ground-breaking performances, ranging from Baroque to Contemporary music, David Greilsammer has also been celebrated for his Mozart interpretations. He has performed in Paris all of Mozart’s piano sonatas in a one-day “marathon”, and he has also played and conducted all of Mozart’s twenty-seven piano concertos in one season.

David Greilsammer’s albums, as pianist and conductor, have been released by Vanguard, Sony Classical, and Naïve, and have won numerous international prizes and awards. In the last few years, his recordings have received five distinctions from The New York Times, including one for “Scarlatti: Cage: Sonatas”, a bold solo recital that was selected among the ten most important events in the world of classical music.

Since 2013, David Greilsammer serves as Music and Artistic Director of the Geneva Camerata, one of the most innovative orchestras internationally. With this ensemble, he has toured all over the world, performing in the most prestigious venues and festivals.

In the past few seasons, he has given solo recitals at the Wigmore Hall in London, Concertgebouw in Amsterdam, Théâtre du Châtelet in Paris, Mostly Mozart Festival in New York, Kennedy Center in Washington, Verbier Festival, Forbidden City Theatre in Beijing, Suntory Hall in Tokyo, Centro Cultural de Belém in Lisbon, Hamburg Elbphilharmonie, and the Venice Biennale.

Released by Naïve on a new album this season, his piano recital named “Labyrinth” has already been described by the international press as ‘ingenious’, ‘fascinating’, and ‘courageous’. This unusual solo program will also be performed on tour, throughout the USA, Europe, and Asia. 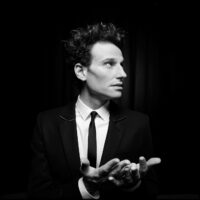