David Glukh was born in Moscow in 1975 where he attended the Gnesin’s Music School. (student of Vladimir Shlepakov, Boris Shlepakov and Andrei Ikov) In 1990 he immigrated to Israel where he spent the following three years in the Thelma Yellin High School for the Arts. (student of Ram Oren, Ariel Sassoon and Edward Kuskin) He later served in the Army Orchestra from 1993 to 1996.

Since his graduation from The Juilliard School in May 2000 (student of William Vacchiano and Mark Gould), David Glukh has been leading an active performance schedule first as a member of Dallas Brass (2000-2002) and later as a bandleader, composer and a soloist of David Glukh Klezmer Ensemble (which released two critically acclaimed recordings: "Live! From New York" and "Klezmer Travels the World"), Manhattan Soloists and Wholly Brass in addition to solo/chamber music engagements throughout the world. To date, Mr. Glukh has released 3 Solo Albums (Trumpet and Piano).

Since 2008 David has been collaborating with composers in performing/recording music of our time. In April 2008 Mr. Glukh recorded a premiere recording of Trent Johnson's Trumpet Concerto with Kiev Kamerata, conducted by Valery Matyuchin. David has been also collaborating with legendary organist/composer Anthony Newman in creating a solo trumpet repertoire for the piccolo trumpet. Their full-length CD of trumpet/piano works with composer a the piano has been released in July 2015. In April 2018 Mr. Glukh was fortunate to premier Antony Newman’s new Piccolo Trumpet Concerto (dedicated to him) alongside members of Orpheus Chamber Orchestra with the composer at the piano. Another frequent special collaborator is a maverick Russian composer/pianist/organist Iouri Grichetchkine, with whom David has produced a series of YouTube videos of Iouri's beautiful works for piccolo trumpet and piano/organ. David and Iouri released their first CD, titled "Beginnings" in February 2016. Their second CD was released in August 2017 and includes transcriptions of Russian romances by Rachmaninov, Rubinstein, Glinka and Rimsky-Korsakov for Trumpet and Piano alongside beautiful compositions by Iouri Grichetchkine.

In 1995, Mr. Glukh received an award from the Israeli Musicians Union for excellence in performance. He was a recipient of the America-Israel Cultural Foundation Scholarship from 1990 to 2000. 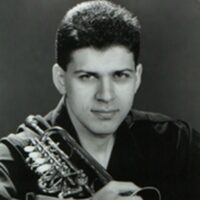