Born in London (UK), Darius lived in Israel since 1993. He began working as a professional illustrator while still in high school, when he illustrated a book about Modern Jewish History, and another about Vietnamese refugees. However, he didn’t regard art as a possible career and studied architecture at University.

Later, after moving to Israel, he returned full-time to illustration and began painting and sculpting too. A formative period spent in the Sinai desert, and his own spiritual search, led him to begin to produce art around Biblical subjects, which continues to be his main artistic preoccupation today.

From 2013-2016 he illustrated a series of five books, a Children’s Torah, for a small Jewish publisher in Berlin. This resulted in a series of 54 original paintings, each on a theme, or themes, from the weekly Torah portion. He had participated in an exhibition almost every year since 2001, most recently at the Stone Gallery, Oxfordshire, England. 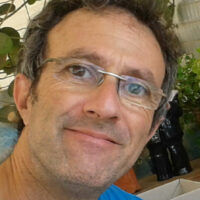