She studied literature (Tel Aviv University and the University of Chicago) and Cultural Studies (Hebrew University of Jerusalem). Her research on the cinematic representation of Palestinian ruins in Israeli cinema was published and presented worldwide.

Mirror Image, her first film, won the Van Leer Award for Best Short Documentary Film at the Jerusalem Film Festival and was nominated Best Shorty Documentary at the DOC NYC film festival, and is screened internationally.

Mirror Image: short documentary film | Israel | 11 min | 2013
Jewish Israeli grandparents are challenged by their grandchild to compose an agreed-upon version of the untold story of a large mirror, taken from an Arab village after the 1948 war. An intimate discussion that reflects on how history is written, contested and negotiated.

Schwartz is of a new generation of Israeli Jews who challenge the dominant Zionist narrative by pressing her own grandparents for a more honest version of their story (Benjamin Doherty, electronicintifada.net)

With its accented aesthetic and what can be seen as a surprising choice of topic, Mirror Image teaches us that these counter-spaces can also be occupied by “accented filmmakers” who were born and raised in Israel. It is indeed a “minor film”; but if there is one thing we can learn from Mirror Image, it is that the marginal often deserves a more central place (Neta Alexander, Media Fields Journal).

The film can be viewed online via a secure screener. 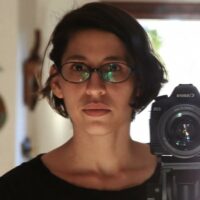