Danielle has been invited to perform as a soloist on some of the world’s most prestigious stages: Carnegie Hall Stern Auditorium NY), Tchaikovsky Concert Hall (Moscow), The Barbican (London), Lincoln Center (NY), Symphony Center (Chicago), Roy Thomson Hall (Canada) and many more.

Danielle is a grant-holder of the Vladimir Spivakov International Charity Foundation, recipient of the “Oleg Yankovsky prize – Artistic Discovery of 2015-2016” – the Young Artist Award for young promising artists – awarded by Maestro Vladimir Spivakov. ​She was named among the Top 10 classical music performers in 2016 by The Daily Gazette and Critic’s Choice 2016 in Classical music by the ‘Times Union’.

Danielle is a winner of the Flame Int. Competition (Paris, 2014), The Muse International Music Competition (Athens, 2014 & 2015) and the Israeli National Cello Competition 2013. She has been a student of Prof. Frans Helmerson at the Barenboim-Said Music Akademie in Berlin since 2015.
​
Born in 2002 to a family of musicians, Danielle was drawn to the cello at the age of four, after listening to a recording of Jacqueline du Pré.

Danielle plays an Enrico Orselli cello, built in Pesaro around 1925/1930 by the master Italian luthier and student of Ettore Soffritti, and a Claude Thomassin bow built in Paris around 1900/1920. These exceptional instruments were graciously put at Danielle’s disposal by Dr. Moshe Kantor through the Vladimir Spivakov International Charity Foundation. 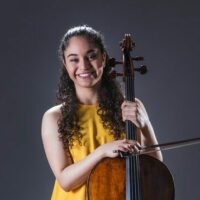