Daniella Crankshaw was born in Israel but was raised in South Africa. She studied Dramatic Arts at the University of Witwatersrand and majored in Acting and Directing. She made Aliyah in 1997 with her husband and young son and immediately immersed herself in the English-language theater in Israel.

In 2013, Daniella opened a production company, Desert Rose Productions, with the purpose of elevating English-language theater in Israel. Her comedy show, “Together Against the Odds”, which she performs with her husband, depicts her life with her husband, their decision to make Aliyah and the culture clash they experienced. The show has traveled across Israel to great success and even toured to South Africa. In addition, the production company mounts the play, “All My Sons”, every year and tours Israeli schools where children learn the play for the English Bagrut.

In 2019, she embarked on an ambitious project to open Center Stage, a unique, vibrant, professional, English-language performance venue in Ra’anana, the first of its kind in Israel. Its aim is to become the creative hub for English-language theater and bring it into the mainstream of Israeli culture.
Center Stage creates vibrant cultural center that inspires a creative exchange between artists, audiences and the community. 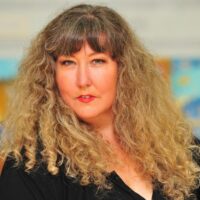