Daniel Strahilevitz is the principal pianist and vocal coach of the Vienna PlusOpera Otto Edelmann Society Showcase, an organization with which he performed several operas, including Gianni Schicchi, Così fan Tutte, Le Nozze di Figaro, L’elisir d’amore, La Serva Padrona, The Telephone and Jesus Christ Superstar. In 2018 Strahilevitz gave his debut recital in Xiamen, China, after which he was invited to direct masterclasses for pianists and singers in 2019.

Strahilevitz is also a principal vocal coach in the American Vienna Summer Music Festival and has been the vocal coach of the Opera class at Richard Wagner Konservatorium in Vienna. Through the varied performances in Solo Recitals, Chamber Music, Lied and Contemporary music performances he has already established himself as a versatile musician – an exciting soloist and a passionate collaborative artist, performing in many countries around the world, in Europe, Asia, Israel and South-Africa.

Daniel is the first Prize winner of Baden-Württemberg piano competition in Stuttgart (2015) and Composers Forum Prize (Best performance) at the Hanns Eisler Hochschule für Musik in Berlin (2015), critically acclaimed pianist Strahilevitz was invited by Lang Lang to perform at the Gstaad Menuhin Festival in 2016. He recorded for the Belgian RTBF and the Israeli “Voice of Music” Radio channels.

Daniel earned Bachelor's degree at the Tel Aviv Buchmann-Mehta School of Music (BMus) and a Master's degree at the Hanns Eisler Hochschule für Musik (MA), in the classes of Eldar Nebolsin, Emanuel Krasovsky and Yossi Reshef and has worked with notable mentors including Andras Schiff, Menachem Pressler and Robert Levin.

He is a recipient of prizes and awards from the South-African Music Rights Organization and the American-Israel Cultural Foundation. 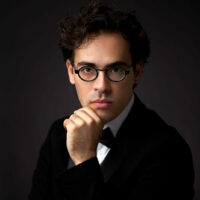