An international figure in architecture and urban design, Daniel Libeskind is renowned for his ability to evoke cultural memory in buildings. Informed by a deep commitment to music, philosophy, literature, and poetry, Mr. Libeskind aims to create architecture that is resonant, unique, and sustainable.

Born in Lód’z, Poland, in 1946, Mr. Libeskind immigrated to the United States as a teenager and, with his family, settled in the Bronx. He received the American-Israel Cultural Foundation Scholarship and performed as a musical virtuoso, before eventually leaving music to study architecture. He received his professional degree in architecture from the Cooper Union for the Advancement of Science and Art in 1970 and a postgraduate degree in the history and theory of architecture from the School of Comparative Studies at Essex University in England in 1972.

In 2003, Studio Libeskind won another historic competition—to create a master plan for the rebuilding of the World Trade Center in Lower Manhattan. In addition to a towering spire of 1,776 feet, the Libeskind design study proposed a complex program encompassing a memorial, underground museum, the integration of the slurry wall, special transit hub and four office towers. This plan is being realized today.

Upon his move to New York, Studio Libeskind quickly became involved with designing and realizing a large number of commercial centers, such as Westside in Bern, the Crystals at City Center in Las Vegas, and Ko-Bogen in Düsseldorf, as well as residential towers in Busan, Singapore, Warsaw, Toronto, Manila and Sao Paulo.

Mr. Libeskind lives in New York with his wife and business partner, Nina Libeskind. He is a licensed architect in the State of New York. 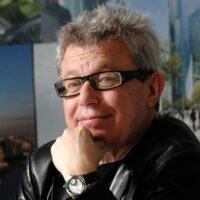