Daniel Elkayam (b. 1992) is an art designer and photographer based in Tel-Aviv, specializes in conceptual design, material exploring and reactions to his surroundings. He graduated Bachelor's studies at the Industrial design department at Bezalel Academy of Arts, Jerusalem. In 2017 took part in the CLEVER student exchange program for creative leadership and entrepreneurship in Tallinn, Estonia. In there won the 1st place together with his group “HOMIE” at the STARTERcreative areal contest.

In his works, Daniel tries to implement his curiosity and yearning for aesthetics. He examines the range between art and design by taking things in and out of their context, surprise, creating hybrids and transformation. He explores and expresses his inner world and narratives through objects and experiences, through materiality, emotions and storytelling, creating a fusion between different worlds of content, and enjoying leaving the place for the unexpected, the unknown. Daniel creates with passion and inspired by observation and empathetic vision of his surroundings, by the wonder of nature and its peculiarities, biology and science, by the study of fascinating phenomena, conceptual material experiments and cultural discoveries. All this developed into an intuitive approach of creation and thinking. Some of his projects deal with natural materials such as Algae, corrosion, and rust, while others focus on the reactions to his surroundings, activism, personal contexts and provoke discussions through his objects.

His final project SEAmpathy – a project that deals with sustainable and natural materials such as Algae and provided interpretations of application for the new material that he created. As part of his project design process, Daniel collaborated with the Weismann Institute for Science together with Dr. Filipe Natalio and worked in his lab trying to develop speculative living “raw” materials made out of algae. Alongside with another use of the algae as a “dead” matter that he brings back to life with a circular design and zero waste principles.

Currently, works as an independent designer in the field of sustainable and conceptual materials, and a member in the co-operative of Bezalel Alumni Incubator. Nowadays he works on presenting his projects in exhibitions and showrooms in Israel and worldwide, and developing further applications for his Algae-made materials as a self-employed designer and a collaborator with different companies – such as “OVO” – A Polish company of conceptual and natural wall panels.

Daniel is a recipient of AICF Design Excellence Scholarship 2019 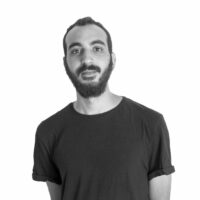