Dan Robert Lahiani is a French video artist and scientist, who reflects on the relation between spaces, individuals and memory. He revolves his approach around architecture, body movement and oral language.

Lahiani makes use of the video medium as his main tool for reflection. He draws his inspiration from familiar and unfamiliar spaces. An apartment. A dining room. A childhood staircase. A gymnasium. The facade of an urban modern building. He visits or revisits detached houses, vagabonding from a “room” to the other. He apprehends the spaces with a formal approach, examining textures, tints and lines. He eventually assigns to his video ballade past memories or future projections.

Through body movements, oral testimonies, he rebuilds scenes with the present interpretation and gives birth to a surrealistic language. The performers involved are either his partner, his family, or himself: “ We act or reenact “. Questioning the relationship between a character and a space, and the relation between multiple cultural identities put into play, he tells, and retells fragments of memories, sowing the seeds of tension between documentary and fiction.
Born in Paris, Dan Robert Lahiani studied acting for 4 years (Cours Simon – Cours Florent) and did a master’s degree in civil engineering ( Lycée Louis Le Grand, Mines de Nancy).

He moved to Israel to achieve his first project as an engineer in a solar energy company. His challenge was to develop a system capable to convert grayscale images into temperature maps, thanks to visual range cameras. ​After two years, he started to devote himself to his art.
In 2013, he started studying at The Bezalel Academy of Art and Design of Jerusalem, in the Screen Based Art department. His works were exhibited in Museums and galleries (The Contemporary Jewish Museum, Mana Contemporary Chicago), and were part of official selections in experimental film festivals in the U.S and Europe. 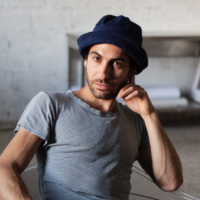