Chana Helen Rosenberg was born in Manchester in 1946. In 1968 she received a Fine Arts Degree in Painting and Printmaking (with Honours) from Maidstone College of Art, U.K. In 1969 Chana Helen received an Art Teaching Certificate from Leeds University.

Between 1969 – 2006 She pursued a teaching career in Art, Special Needs and Nursery Education, in England. In 2006 Chana made Aliyah, living in Nachlaot, Jerusalem, where she focused on her artwork full-time. She moved to Be’er Sheva in 2013.

As an artist, Rosenberg paints mainly in oils, focusing on the Jewish Festivals, Biblical themes and her local surroundings in Israel. Her artwork featured in many Chabad calendars.

2013 – Became a member of the Association of Israeli Painters and Sculptors, taking part in group exhibitions.

2014 – Commissioned for a poster for the ‘Proudly Jewish‘ series for Voices and Visions, the Harold Grinspoon Foundation (HGF), U.S.A.

2016 – Joined Beit Haomanim (The Artists’ House) in Be’er Sheva, where there is always some of her work on display. 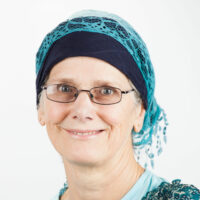