Her repertoire includes orchestral music, chamber, vocal and electronic music, as well as music for dance and theater.

With her composition “Yizkerem”, for A-cappella choir, Bracha has been chosen as one of the composers in presenting Israel at the Asian Composers League Festival, Taiwan (2018). The same composition won a prize in the International Choral Writing Competition named after A.D Kastalsky – Moscow (2018).

In Israel, her works are broadcast on the Israel Radio Voice of Music program and were performed at various events, including: Voice of music young artist competition, Israeli Music Festival, Zimriya Festival (2018), Israel Festival (2017), Piano Festival (2015), a series of Excellence – the future generation, Eden-Tamir Music Center, Ein Kerem, and a series of Singing with the Sinfonietta, Performing Arts Center, Be’er Sheva (2014).

Bracha Bdil is a member of the Israel Composers’ League and her works are published by the Israel Music Institute. Bracha has been a lecturer at the Levinsky College of Music Education, the Jerusalem College and at the Ron Shulamit Conservatory where she still functions as a member of management.
Starting from season 2018-9 Bracha is the artistic director and chief conductor of the women’s “Zmora” orchestra in Jerusalem. 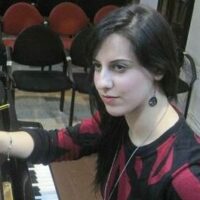