Bar Zimmermann, born in Israel in 1998, began studying the recorder at the age of 8 with Ganit Polin and the oboe at the age of 12 with Michael Lam. Today she is studying recorder with Drora Bruck and oboe with Omri Raveh.

Bar studies in 11th grade at the classical music class of Thelma Yellin High-School of the Art.

Bar played as a soloist with Meitar Ensemble, Barrocade Ensemble, the Givatayim’s Conservatory String Orchestra and with the Thelma Yellin’s Choir, in Israel and Germany. She played with the Israel Chamber Orchestra and she is a member of the Tedarim Project. 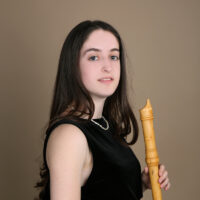