Bar Zemach was born in July 17th, 2000 in Tel Aviv. His mother Tali (a former flutist) and his father Nir (The Principal trumpet player of the Israeli opera orchestra), were both supported by the America-Israel Cultural Foundation.

Since his childhood, Bar began playing the horn with his father’s assistance, and later he started to study the piano with private lessons. His parents supported and nurtured him by being musicians themselves, striving for excellence from an early age.

At twelve, Bar began receiving private lessons from the principal Hornist of the Israeli Opera, Sharon Polyak, with whom he studied for about two years, and at the beginning of his studies at the Thelma Yellin High School of the Arts, he continued studying the Horn with Prof. Chezy Nir for four years.
During high school, Bar took a part in the programs of the Jerusalem Music Centre and played with the Young Israel Philharmonic as a principal Horn.
Aside, he also played symphony series and operas with the Israeli Opera Orchestra as a guest horn player.


At the age of 16, he performed for the first time as a soloist with the Israeli Chamber Orchestra aside his teacher, Chezy Nir.
At the age of 17, he won the first prize in the national competition “Kfar Saba” and played as a soloist with the Haifa Symphony Orchestra. Later that year, he was invited to play as a soloist in a concert of the Keynote program with the Israel Philharmonic Orchestra.
Upon graduation from Thelma Yellin High School, Bar received a full matriculation certificate that also includes 15 units of classical music.

in the summer of 2018, Bar flew to Europe to take a part as a principal horn player in the Moritzburg Festival Academy and it’s Orchestra, with whom he played the nocturne from the midsummer night’s dream of Mendelssohn.
He was praised in the Press for his playing of the Solo part:

After that he continued to the Lucerne Festival Academy and it’s Orchestra Tour as a utility Horn player.

After playing with the Junge Norddeutsche Philharmonie few projects as a principal Horn, In May 2019 Bar joined the Horn class of Professor Christian Friedrich Dallmann at the University of the Arts in Berlin for his first Bachelor's studies.
at the end of November 2020 Bar was chosen as a High Horn player of the Junge Deutsche Philharmonie with an Audition.
Later on, he recorded a CD for the Deutschlandfunk Kultur with the Staatskapelle Berlin (Berlin State Opera Orchestra) as a 3rd Horn player. Since then he is playing with them as a gast player Concerts and Operas as third and First Horn.
Over 2021 Bar Recorded a CD with the Berlin Academy of American Music.
Later on in September he was chosen to play in the Second Round of the ARD Horn international music competition In Munich with other 11 international candidates.

In 2022 he joined after an Audition to Maestro Daniel Barenboim to the West-Eastern Divan Orchestra as a principal Horn player.
Later then, he won a temporary Contract as a Third and Fist Horn player in Düsseldorfer Symphoniker.

Along his Job, Bar continues to play as a Guest Horn player with other major Orchestras and doing Chamber music projects in Europe and Israel. In 2022 he recorded Berio Wind Quintett Opus Zoo with the Wind Professors of the University of the Arts Berlin (UdK Berlin). In September he will play the Beethoven Septett in the Jerusalem international Chamber Music Festival. Along these Projects he plays regularly Chamber Music in Berlin with the Mozartensemble and Kammerorchester Amadé.

Bar has been supported since 2015 by the scholarship program of the America-Israel Cultural Foundation. Also through scholarships from the Ronen Foundation and Mif’al Hapais. 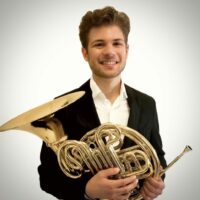