Avner took part in many international festivals in Europe and USA. He has performed worldwide in flute recitals and as a Soloist with the Israel Camerata Jerusalem, the Czech Philharmonic, Tel-Aviv Soloists Ensemble, the Revolution Orchestra, the School Orchestra in Hannover and others. His performances and recordings have been broadcasted on Israeli Radio, Dutch Radio and German Radio. 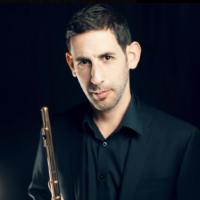