Aviva Beigel attempts to associate, even become friendly with the illness and, presumably, in this way enlist a sense of optimism that might help in overcoming the trauma.

According to the artist, this was not a conscious process. With cancer’s discovery, she felt betrayed, sad and helpless.

Her artwork was her therapy. After the cancer was discovered, she was forbidden by her doctors to eat sweets. As the daughter of a long line of bakers and a sworn cookie lover, she turned to baking cookies from clay, painting them, adding decorations and putting icing on top, everything, anything other than eating them.

This pattern was also seen in her earlier works that were filled with shattered glass and ceramics (mosaics). Her movement to whole shapes reflected her way of rejecting the dismantling, shattering and breakage in her life. Within the “Cookies” series, human-like images began to appear. Some of whom displayed deformities in the shape of punctures and depressions.

Other works, in which Aviva inlaid shapes, like hearts, cats and palms (represent the artist’s hand and a sign of good luck) and more, all of which were symbolic motifs of great personal significance and expressions of vitality and continuity.

Through her butterflies and wings, Aviva tried to sense gliding high above, hovering above the sickness and pain and her separation from them. Optimism began to sprout from the works and came across as an unconscious message. The flaws and impairments could not really affect the colorful personalities and it seemed that the innocent, colorful and naïve style broadcast primarily a sense of hope and joy.

In the next stage of her work, Amazon-like images began to appear in a way that represented a sense of rectification.

The Amazons in Greek mythology were powerful and daring so the name “Amazon” became synonymous with the ideal of women who are strong and courageous, women of valor. From Aviva’s standpoint, her dealings with the Amazon concept served as a welcomed and comforting meeting with women for whom injury, deformity to their body and their femininity produced control and strength.

As in all of the bodies of Aviva's work, it seems that the visual experience removes from both the viewer and the artist herself, the fear of the illness lurking behind the scenes. 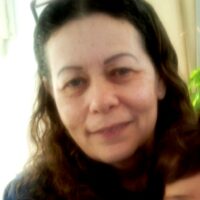