In 1999-2003 The Aviv Quartet was awarded several government prizes, such as the Israeli Ministry of Culture Prize (2001), the German Ministry of Education Award (1999), Prize of the Israeli Lottery Foundation – Mif’al ha Pais (2003).

The Aviv Quartet studied with Gad Kogan, Irina Svetlova and Chaim Taub, than continued its studies with the members of the Alban Berg Quartet at Cologne Hochschule (1998-2000), and Daniel Quartet at Rotterdam Conservatory. During 2002-2003 they collaborated with the Ysaye Quartet at CNR de Paris.

'Aviv', meaning ‘Spring’ in Hebrew, is a signifier of new beginnings and the season of birth and fresh thinking encompasses the Aviv Quartet’s artistic philosophy of stripping away artificial coverings “to reveal true nature, sharper definition and heightened awareness”.

Its recordings for Naxos, including works by Franz Anton Hoffmeister, Erwin Schulhoff and Erno Dohnanyi, have been highly acclaimed for their freshness of spirit vivacity, and top class quality of string quartet performing. In June 2020 they released the Schubert string quintet with Amit Peled together with the second string trio. 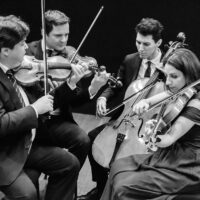