The Israeli conductor, Avi Ostrowsky, was interested in music during his childhood, but was already 17 before he took up music professionally. In 1961 after his military service he graduated from the Rubin Academy of Music in Tel-Aviv having studied composition under Professor Mordechai Seter and conducting under Maestro Gary Bertini.

Then followed a period when Avi Ostrowsky worked extensively in Israel with all the leading orchestras of Israel, including the Israel Philharmonic Orchestra, the Jerusalem Symphony Orchestra and the Israel Chamber Ensemble. After two years at the Vienna Academy of Music he graduated in 1968 having studied under Professor Hans Swarowsky. During this period he also visited Sienna (Italy) to work with Maestro Franco Ferrara.

In May 1968, Avi Ostrowsky won the first prize of the Nicolai Malko International Competition for Young Conductors in Copenhagen, after which he has been invited to conduct many orchestras all over the world.

For the 1998-99 Season Maestro Avi Ostrowsky was again appointed the Music Director and Chief-Conductor of The Israel Kibbutz Orchestra until 2003. 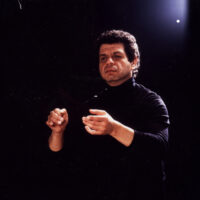