Ariel Sherman was born in 2004 in Israel. She won a scholarship in the field of classical ballet.

Ariel is dancing since she was at the age of 4, she started her journey at the school CityDance in Bethesda Maryland, where she danced classical ballet, modern, Bollywood, steps from the age of 4 to 8. Since she was 9 and until today, she dances at the school Jerusalem ballet with the teacher Nadia Timofeva, Oded Ronen and the staff at Jerusalem ballet.

Since she was in 7th grade, 12 years old and untill today she studies at the Jerusalem Academy Of Music And Dance in Givat Ram, Jerusalem, with academy teachers Luda Crndl, Ilan Cav, Ziva Shocht and Moran Decl.

Ariel participated in the competition Mali Reicman in 2016 where she completed all but the last part of the competition. During the summer of the 2018, 2017, 2016, 2015 and 2014, Ariel participated in a number of courses with guest teachers from Israel and abroad within the Jerusalem academy of music and dance and within the Jerusalem ballet school. 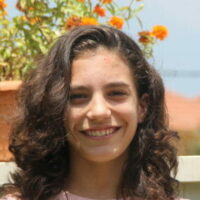