Cellist Amir Eldan was the youngest member of the Metropolitan Opera Orchestra when he won the position of Associate Cellist at the age of twenty two. He performed with the Orchestra for three years and was invited by James Levine to perform with the MET Chamber Ensemble in Carnegie Hall.

Mr. Eldan was the winner of the concerto competitions at Juilliard, the Aspen Music Festival and the Cleveland Institute of Music and performed at Alice Tully Hall with the Juilliard orchestra. He has collaborated with members of the Guarneri and Juilliard String Quartet, Richard Goode, Lynn Harrell, Steven Isserlis, Kim Kashkashian, Midori and Joseph Silverstein.

In a series of concerts worldwide, he played Bach's six suites and gave recitals at Bargemusic, Columbia University, Encore School for Strings Blue Ribbon Series, Windham Chamber Music Festival, La Sierra University and Indiana University, as well as in Israel, in Tel-Aviv and in Jerusalem.

He has toured the United States and Israel as a soloist with pianist Ofra Ytzhaki. Eldan is a winner of concerto competitions at Juilliard, the Aspen Music Festival, and at the Cleveland Institute of Music.
He has performed in the music festivals of La Jolla, Marlboro, Ravinia, the Chamber Music Festival in Giverny, France, the West Cork Music Festival in Ireland and Open Chamber Music in Prussia Cove, England. His performances have been featured on Public Radio in the U.S., in Europe and in Israel. 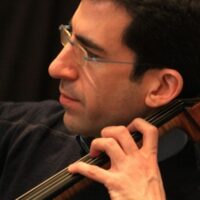