Alon Goldstein is one of the most original and sensitive pianists of his generation, admired for his musical intelligence, dynamic personality, artistic vision and innovative programming. He has played with the Philadelphia orchestra, the Chicago Symphony, the San Francisco, Baltimore, St. Louis, Dallas, Houston, Toronto and Vancouver symphonies as well as the Israel Philharmonic, London Philharmonic , Los Angeles and Radio France Orchestra. He played under the baton of such conductors as Zubin Mehta, Herbert Blomstedt, Vladimir Jurowski, Rafael Frübeck de Burgos, Peter Oundjian, Yoel Levi, Yoav Talmi, Leon Fleisher and others.

This upcoming season Mr. Goldstein will be performing in cities across the world including New York (Rockefeller university and Salon di Virtuosi), Ravinia Festival, Vienna (Bösendorfer salon), Berlin (Salon Christophori), including return engagements with the Haifa Symphony, Tel Aviv Ensemble, Bach festival Orchestra and Shreveport Symphony. He will make his debut with the Bogota Philharmonic playing Mozart Concerto no. 25, and with the Orquestra Filarmonica Minas Gerais in Brazil playing Barhms Concerto no. 2. Mr. Goldstein will also continue his highly acclaimed recording project for the Naxos label of all piano concerti by Mozart, with the Fine Arts Quartet. The upcoming recording will feature Concerti nos. 19 and 25. The last season saw the release of two CDs on the Naxos label: Mozart Piano Concerti Nos. 9 and 17 with the Fine Arts Quartet (a follow-up to their two critically acclaimed recordings of Nos. 20 & 21 and Nos. 23 & 24) and Scarlatti 19 Piano Sonatas.

During the 2019-2020 season Mr. Goldstein performed Beethoven’s "Emperor” Concerto at the New Year concert with the Beijing Symphony at the Forbidden City Concert Hall. He returned to play with the Kansas City, Ann Arbor, Illinois, Spokane, Bangor, Augusta, and Pensacola Symphony Orchestras, as well as a performance of Beethoven’s Emperor Concerto on fortepiano with Mercury Houston. He played Bernstein's "Age of Anxiety" with the Jerusalem symphony as well with the Xalapa Symphony in Mexico to celebrate the composer’s centennial, and performed the New Year’s concert with the Beijing symphony in China. He gave recitals and chamber music, including tours with the Goldstein-Peled-Fiterstein Trio, the Tempest Trio, and the Fine Arts Quartet at the Mendelssohn International festival in Hamburg Germany, as well as in Cleveland, Washington DC, New York, Burlington, Key West, Sarasota, Melbourne, Duluth, and other cities.

Other recent highlights include appearances with the Indianapolis Symphony as part of a Prokofiev Festival performing the composer's Piano concerti nos.1&4, as well as a 17-concert Latin American tour with the Israel Chamber Orchestra including concerts at Teatro Colón in Buenos Aires, Teatro de Bellas Arts in Mexico city, Teatro Nacional in San Jose, Teatro Solis in Montevideo etc. He also played with the Chicago Symphony at Ravinia, and at the prestigious Ruhr Piano Festival in Germany performing Mozart, Britten and Poulenc in one evening with Leon Fleisher, his former teacher, conducting. He gave the premiere of Lost Souls with the Kansas City Symphony and Michael Stern written for him by the noted Israeli composer Avner Dorman and debuted with the London Philharmonic Orchestra and Vladimir Jurowski.

Mr. Goldstein was recently honored with the "Society of Scholars" award given to him by his alma mater - the Johns Hopkins University. This was given in recognition of his accomplishments and contributions over the years. He serves as the Artistic Director of the "Lieven Piano Foundation” summer school in Vienna, as well as the Artistic Director of the Mt. Angel Abbey Bach Festival in Oregon, and Co-Director of The Distinguished Artists Concert & Lecture Series in Santa Cruz, CA. He created the Emerald Coast Music Alliance, whose annual festival in Florida is devoted to sharing the beauty of classical music to under-served communities, at no charge. Last year the festival featured 12 musicians performing 63 concerts! He graduated from the Peabody Conservatory of Music studying with Leon Fleisher and received scholarships from the America Israel Cultural Foundation. Following his graduation he became a "Performer Fellow” at the Guildhall School of Music and Drama in London where he initiated chamber music concerts involving staff and students, as well as an annual festival dedicated to the piano duet repertoire. He was an artist in residence at the "Theo Lieven” piano academy in Como Italy. He currently holds the position of "Distinguished Visiting Professor” at the University of Missouri - Kansas City. 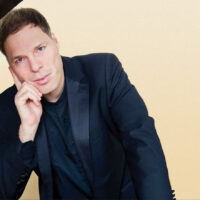