Her solo and chamber music performances have been broadcast on BBC Radio 3, Singaporean Radio, and Israeli Radio, and she has recorded for Naxos, Meridian, NMC, Orange Mountain Music, Divine Art Records and Resonus Classics.

Born in Israel, Adi began her cello studies at the age of seven with Hillel Zori. She received her Bachelor’s from the Cleveland Institute of Music as a student of Richard Aaron, her Postgraduate Diploma from the Royal Northern College of Music as a student of Ralph Kirshbaum, and her Master’s from the Guildhall School of Music and Drama as a student of David Takeno. She has performed at the Perlman Music Program, Ravinia Festival Steans Institute, Schleswig-Holstein Festival, Verbier Academy, and Banff Music Festival, and she is a regular participant at the Master Classes and Open Chamber Music at IMS Prussia Cove.

Adi performs on a cello made by Giovanni Battista Guadagnini in Parma dated 1765, generously on loan from a private collection. 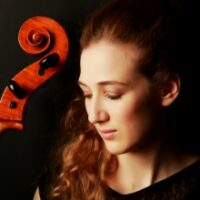