Adam Allouche is a young conductor, pianist, and horn player, currently living in Tel Aviv and studying in the Buchmann-Mehta School of Music.

Born in Israel, but having moved around Europe throughout his childhood, Adam started the French horn in Luxembourg, at age 10, studying with Luxembourg Philharmonic horn player Marc Olsen. After moving to Zurich at age 12, he continued his horn studies with Zurich Opera horn player Daniel Werren. Later at age 15, Adam moved back to Israel, where he joined the Thelma Yellin High School of Arts in Israel, and continued his horn studies with Israel Philharmonic horn player Michael Slatkin for 5 years. Last year Adam joined Chezy Nir’s horn class.

Upon arriving in Israel, Adam started to study piano with Dr. Michal Tal at the Givatayim Conservatory. Only a year later, he started to participate and to perform in chamber music festivals (both as a pianist and a horn player), such as the Kuhmo Chamber music Festival in Finland, the Pablo Casals festival in France, and the Euroarts festival in Hale Germany. As a pianist, Adam participated in masterclasses with Michael Wladkowski, Arquiles delle Vigne, Itamar Golan, and Peter Frankl. As a horn player, Adam had masterclasses with Stefan Dohr, Dale Clevenger, Eric Terwilliger, Luca Benucci, Sarah Willis, Andre Cazalet, and many more.

As a high school student, he played the horn in the Thelma Yellin symphony orchestra and Young Israel Philharmonic Orchestra. At age 16, his curiosity of music making and the idea of conducting pushed him to organize his first conducting project with young musicians, resulting in a successful concert of the Dvorak Serenade for winds. As a result, a year later at age 17, Adam was given the opportunity to be the first student to conduct the Thelma Yellin Symphony Orchestra in concert.

Throughout his youth, Adam was mentored by his grandfather; musicologist Harry Halbreich. Feeding his curiosity, and deepening his knowledge about music history, especially music of the 20th century (Due to Halbreich’s collaborations with Olivier Messiaen, Arthur Honegger, Bohslav Martinu and Iannis Xenakis).

After high school, he started a conducting Bachelor’s degree at the Buchmann-Mehta School of Music, studying with Yi-An Xu. He also began to play in the Buchmann-Mehta Symphony Orchestra, playing principal horn in pieces such as the Schoenberg Chamber Symphony 1, Petruschka, Bach Brandenbourg Concerto no.1, and many more pieces of the standard repertoire. After a successful first year, Adam was pushed to join the Master Degree’s conducting class, where he would spend his second and third year studying with Maestro Yoav Talmi.

As an excelling young musician, Adam Allouche started to play professionally with all major Israeli Orchestras, such as the Israel Philharmonic Orchestra, Jerusalem Symphony Orchestra, Tel Aviv Soloists, and many more, playing under the direction of great conductors such as Zubin Mehta, Lahav Shani, and Ilan Volkov. In his second year at the Buchmann-Mehta School of Music, with the goal of maintaining a high level of piano playing, Adam had his first solo recital. Playing pieces by Rameau, Cesar Franck and Olivier Messiaen.

As a young conductor in the academy, Adam has gained conducting experience through different projects, such as the “Golden Baton” project, between conducting students and the Haifa Symphony Orchestra, where he performed movements of Brahms’ 2nd and 4th Symphonies. Having always been curious about contemporary music, Adam had the opportunity in the Buchmann-Mehta School of Music to conduct pieces by Rebecca Saunders and Jose-Marie Sanchez-Verdu. Last year, Adam was chosen to participate in a Masterclass with Maestro Osmo Vänskä, conducting Dvorak’s 9th Symphony with the Buchmann-Mehta Symphony Orchestra.

Adam is a recipient of the America-Israel Culture Foundation grant, both as a horn player and as a Conductor. He has recently received a certificate of honor for his work in the school’s orchestra, appointed by maestro Lahav Shani and school director Prof. Tomer Lev. Adam speaks fluent French, English, and Hebrew, and conversational Spanish and German. Currently, Adam is in his 4th year at the Buchmann-Mehta School of Music, continuing to study conducting and play as a member of the School’s Orchestra. 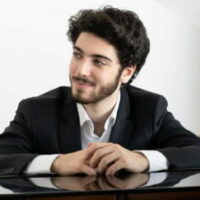